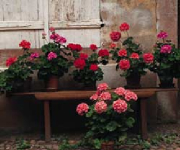 When I think about geraniums, what hits me first is the smell. The scent strikes your senses in exactly the same way that biting into tin foil does. The next thing is memory. My other mother, Christine, grew geraniums, bright red, saucy ones and African violets, exotic succulents with fur. From the time I could be trusted to take the garden path without wandering to the river, I spent every available moment in her presence. Fascinated by everything she did, I watched her plants bloom year round, and I’d help.

“Careful,” she’d say to me. “One drop of water on the leaves and they die.” I used to wonder how these plants survived in the torrents of rain I had read about in geography class. Now I think Christine just wanted to protect the wood of her table rather than the fragile plants cluttering it. I listened to her hum, convinced this was a secret language only plants could understand. Perhaps it was the humming that soaked love into the soil. She attempted to nurture my skill in growing these plants by giving me cuttings and leaves to root. My efforts failed, the cuttings would rot, or if they did root, they died either of drowning or thirst.

From her tending to plants, I trailed her to dusting and learned to savour the bite of lemon oil in my nostrils. I would watch for the gleam of sunlight emerging the grain of the wood in the wake of the polishing cloth and imitate her satisfied sigh. Later, she would unfurl yards of crisp cotton, to billow like sails across the dining room table. Dresses took shape. I knew these dresses would come to me as her daughters outgrew them, so it was like getting new clothes only I would have to wait a few years.

The idea that I was separate from this family never occurred until separation came to me like a sudden jab of a needle during the haying season. The men were out in the back fields close to the woods. They couldn’t hear her call though she had a sharp, soprano voice. The signal for dinner was putting a jacket on the end of a pole and propping it against the front of the house. After being entrusted to this, I helped her set the table. I counted twice. Then she told me it was time for me to go home to my dinner, a small remark, not intended to hurt but it did. It occurred to me then that no matter how much time I spent there, I would now need an invitation to her table and I would never feel free enough to help myself from the cookie jar.

I began to compare the two homes I tried to live in simultaneously. At Christine’s the warm smell of fresh bread was the same as the bread my grandmother baked. The same type of food graced the table, only being my grandfather was a fisherman, we ate a lot more fish. (Today people rave at me about lobster, they can have it.) At Christine’s there was a complete family, a father, a mother and the four children, two boys and two girls at home and one away in the navy. They talked and laughed and most importantly, had dessert at every main meal. At my grandmother’s, there were two grandmothers, a grandfather and five children arguing over the bread, butter, and molasses.

Gradually, I pulled back from Christine, knowing that, as I recognized the vast differences in the two homes, I would not suffer them. Within a year, my parents arrived home. They packed up our belongings and took to the road again like gypsies or nomads. I didn’t return for thirty years.

In revisiting the moments of my youth, my moments with Christine shine with a numinosity that is at once exaggerated into fiction and at the same time absolutely factual. My own perceptions create this magic bubble of memory and the warm feelings associated with them.

The image of my grandmother’s house during those years also evokes singular moments and feelings triggered by the scent of a January thaw or a summer wind ripe with sweet grass but those stories fit elsewhere.

The shine of my innocence scuffed in that first intuition the world was not how I imagined it, became worn and devoid of sparkle until I was as dull as an old penny. I looked to the promised land of my childhood and returned, the prodigal.

I had been home several times for funerals. Christine had helped with all the arrangements for my grandmother’s funeral but it had been five years between my last visit and the move. After this period, seeing Christine so shrunken and aged frightened me. I didn’t know if I could risk another goodbye. I was determined to keep the distance between us. But with a hug, and a genuine joy in her voice, she welcomed me home and I began to melt. I also began to grow up.

Far from resenting my grandparents for not being happy and light, I learned to respect them for coping with five children and the constant crises created by the mental and physical illnesses in my parents. My grandparents were raising the third generation and like geraniums, most of their strength passed to the first generation. My grandfather had been suffering the effects of a fishing disaster in which thirty-two men were drowned. As a survivor, he had many demons to wrestle. My grandmother taught school to support us. She is a mystery I am still exploring.

But to my delight, some things remained constant: Christine still grew geraniums on the cedar chest in her spare room. Thirty years ago, I slept in that room, honoured that I was important enough for that bed rather than the cot in the upstairs hallway or the bed I called “the rock” in another room. I recall sitting in the middle of the silver wake of the moon relishing the luxury of being in a house where the clock ticked gently and there was no threat of having to escape through a window later that night.

In her living room, there were more pictures of her family on the tables instead of plants. The pictures had been sent from all over the world. She showed me each and told the story behind the scene. Pride shone in her as she talked about her children in good times. It is her victory that all these children were strong enough to leave home and put down roots in other communities. I couldn’t imagine them haunting their childhood home and seeking peace in the middle of the night. But to my horror there were the other stories, about their problems, very disturbing to me. Her children were supposed to be happy for god’s sake. After I added up her sad face and sighs and tallied them along with each issue, I muttered, “losers” under my breath. She heard me and laughed out loud, shocking herself as much as me. I continued that trend with her. Thinking back, I was able to say things she wouldn’t dare think or say but enjoyed hearing. I was as irreverent as I could be and she enjoyed it. She told me the last time she had dared anything was as a child and had climbed to the top of the barn. This journey ended in punishment for her, severe enough not to try it again but she never forgot “being able to see the whole world.”

We became friends. She called me one of her girls and took me on a trip. I listened to her troubles and she to mine. I never learned the fine art of pie crust. She told me I was too determined not to.

My first Christmas home, she gave me a live African violet. I made a deal with it. I would keep it as long as it wasn’t overly fussy about its feeding schedule. Today, ten years later, I have three huge plants, all of which have been pruned to the roots at various times by an evil housecat now dead (of natural causes). All my geraniums I keep only two seasons and let them go.

I have had to let Christine go as well. She died suddenly one afternoon. No one could do anything. Apart from my enormous grief, what settled over me was an overwhelming gratitude of her role in my life. She loved me. Best of all, I knew it.

I am still discovering things I learned from her: folding a nightgown and placing it just so on a down-turned bed is an art form; care and pride in tasks are taught by example; patience was a gift bestowed on Christine; my love of deep purple violets, the bite of lemon oil in my nose, the music of scissors through cloth, her lemon pie.

In our last winter, we sat one afternoon in a skein of sunlight. My hands were wide, wrapped in the wool she was rolling into a ball. While the strand of wool danced between us, I told her how the biting aroma of red geraniums in hot sunlight never fails to bring me home.

Miramichi Leader columnist and freelance writer, Judy Bowman’s poetry and short fiction have been published in literary journals. Past president of the Writers’ Federation of New Brunswick, she has received two Emerging Artist awards from the NB Arts Board, and was commissioned for an art and narrative project for Year of the Veteran. Recently Judy was one of only three NB writers to have a story appear in The Vagrant Revue of New Fiction.