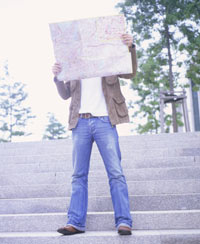 In 1947 I met a perfect stranger and by his one kind and generous deed my entire life was changed forever. I had just turned 20 years of age and by whatever reason, whether by providence or by chance, I met this gentleman, or angel, in the guise of a detective, and he generously met my urgent need for I had been robbed and was penniless. I tried to send a telegram to my folks for financial aid but I found it was impossible to send a collect telegram.

The place was the big city of Chicago where I met the best and the worst of people. The robbery took place in the train station while I was waiting for a train east. I was in the RCAF and my base was Snag, Yukon Territories. I was on annual leave and hitch hiking my way to Nova Scotia. To my surprise there were certain states where hitch hiking was not allowed. Illinois was one of those states. I needed to get to Pennsylvania and that became my goal for the next leg of my journey home.

While sitting in the waiting room at the train station I dozed off and when I awoke my wallet was gone. I reported this to the police and told them the wallet contained my baggage checks. About two hours later the thief was caught trying to use my baggage checks to get my luggage. At the police station I was unable to identify the thief and his story was that some one gave him the checks. The police put this guy on a train to another city just to get rid of him. This was probably standard practice but what happened next wasn’t routine I am certain. The plain clothed detective asked me if I had any money and I admitted I didn’t. Without further questions he took out his wallet and gave me the equivalent of a month’s wages in the RCAF. Was God watching over me? I believe he was.

At that point I decided to switch to the bus and ride Grey Hound to a little town in the next state. I did that, but at the bus station I had another hurtle to cross. There was a picket line around the station entrance and I had to stand in line waiting my turn to get inside. I was cussed and spat upon which made me angry but I also was afraid to complain or to try to defend myself. Finally I was on the bus and we were on the highway east. I was a wiser young man than when I arrived in that city. Was God still with me? I rather think so because while we were streaking down the highway as Grey Hound busses do, we met a large truck speeding in the opposite direction. It sideswiped us but did little damage except to the paint on the bus. Neither vehicle stopped; we kept going to the next bus station.

Of all the experiences on that trip the one that changed me forever was the kind and generous help from a perfect stranger. I could not repay that gentleman but since that day God knows I have passed on help to others without looking for recompense. With God’s help I will continue this practice as long as I live.

Cal Ogilvie writes a regular column in the print edition of Bread ‘n Molasses magazine called “Cal’s Corner.” Retired senior NCO Flight Simulator Technician and small businessman, he grew up on a farm in Nova Scotia. Cal hopes to publish a book called Down East On the Farm about his life.