Keanu Reeves: The Best Gift a Girl Can Get

In August 1994, Keanu Reeves was featured on the cover of Vanity Fair in a white T-shirt and black leather pants. He looked awesome—handsome and sexy—leaning against a 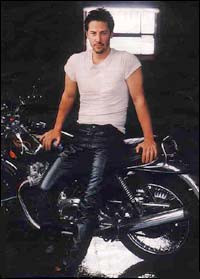 motorcycle. The magazine cover immediately caught my eye as I walked into a mom and pop operation across the street from the talent agency where I worked. Although I’d gone in for cigarettes, I was also searching for a gift, any gift, to give one of my two co-workers, a junior agent, whose birthday I’d forgotten.

So, when I saw Keanu, I grabbed him, a pack of smokes, and a bag of cookies, and headed back to the office. Back at the office, the Peak Freans Fruit Crèmes safely stashed in my desk drawer, I went straight to work making this gift better than the one I couldn’t get.

Earlier that day I made several telephone calls to find out how I get an autographed headshot of the actor. (We did it all the time for fans of the non-deranged, non-stalker sort). Somehow I conned my way into talking to the actor’s big-wig Hollywood agent. How big? I didn’t then, but I now understand the dude’s position when I learned that he represents Oprah. The ensuing silence was embarrassing and the brief exchange ended in a very polite brush-off. But now I had the number of the actor’s media agent in New York. I hung up. I was excited and somewhat relieved. Still, I couldn’t go through with it. I’d used up all my humility and gumption on the first call.

So here I was with Keanu in print. I flipped open the Vanity Fair magazine and ran it through the photocopier. I scribbled an affectionate notation with a black Sharpie. I had to admit, the falsified headshot looked reasonably authenticate.

When the gals and I gathered for the office presentation, I handed over my gift. The young woman, usually unflappable from dealing with casting directors, actors, our boss, actually shrieked. She was thrilled with her gift. Too thrilled, it seemed to me, for such a cut-price gift. I panicked. She thinks it’s real, I almost whispered to the gal standing next to me.

I didn’t have the courage to tell her the truth even as I snapped a photograph of her smiling broadly while holding up the bogus autograph.

The colleague and I have long since lost touch, but I still have the original Vanity Fair tucked away in my home office with other back issue favourites. I also saved the power-agent’s number. It hasn’t come in handy, yet. But you never know.

Between corporate and technical writing gigs, Valerie Poulin writes magazine features, news, profiles, and general-interest articles. She is a published book author and an internationally published poet. Valerie possesses particular esteem for friends transplanted from the east coast because of their warmth, their sense of family and home, and their admirable optimism.
Logging In...