As we all know, time has a way of moving quickly and catching us unaware of the passing years. It seems like yesterday that I was a young woman, just married and embarking on life 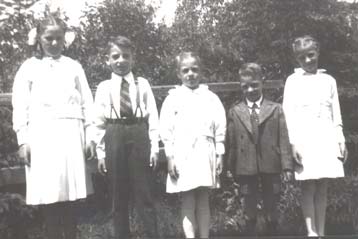 with my new husband; your father. I wonder where all the years went. I know that I lived them all. I have glimpses of how it was back then and of all my hopes and dreams. But, here it is—the winter of my life—and it catches me by surprise. How did I get here so fast? Where did the years go and where did my babies go? Where did my youth go?

I remember well seeing older people through the years and thinking they were years away from me, winter was so far off I could not fathom it or imagine fully what it would be like. But, here it is. Your father is retired now, still moves pretty fast but I see an older man. He’s in much better shape than me, but I see the great change. Not physically the one I married, who was dark and young and strong but, like me, his age is beginning to show and we are now those older folks we used to see and never thought we’d be.

Each day now, I find that just getting a shower is a real chore for the day! And taking a nap is not a treat anymore, it’s a daily occurrence! If I don’t of my own free will, I just fall asleep where I sit! And so, now I enter into this new season of my life, unprepared for all the aches and pains and the loss of strength and ability to do many of the things I once did. I know, however, that although winter has come, and I’m not sure how long it will last, that when it’s over, I will enjoy spring in the arms of my loving Father and wait for my loved ones to come when their winter is over too. So, if you’re not in your winter yet let me remind you that it will be here faster than you think. Whatever you would like to accomplish in your life please do it quickly!

A mixture of words

Not written by an intellect

Periods and paragraphs too

All scream for correction,

But will have to come from you.

Just read with your heart,

And let your eyes through

The words that I write

Put down on paper

With pen in hand of me

In my inner most being where I live,

My life comes from my soul.

I struggle along in this outer shell.

Ever mindful that my life is within.

The pain that I carry in this body of mine

The joy it experiences are the markings of time.

Each day unfolds with mysteries it holds.

Waiting for me to see the beauty it moulds.

The clouds in the sky, the birds in the trees

The snow on the ground and each gentle breeze

Tell of God’s glory that dwells in nature and me.

The indwelling spirit that sets us free

That’s my innermost being, and I’m glad I’m me!

My life began on April 19, 1935 at the home of my Savoy Grandparents who lived by the old Ferry Wharf, in what was then called Chatham. I was born to Reginald Duplessis and Claire (Savoy) Duplessis. My Father Reginald had a French father (Stan Duplessis) and an Irish mother Mary Ann (Minnie) Quinn. My mother’s parents were both French, so I grew up with a taste of both cultures. I am the oldest child and have two brothers and three sisters.

My earliest memories are of living at the corner of Duke and Princess Street. My Duplessis grandparents lived on one side of the house and we lived on the other. The only memory I have of my father while living in this house is of playing cards with him, Mom and my sister Diane. On this occasion I had my first recollection of feelings. We were playing cards and I lost. I started sulking and was sent upstairs to bed where I had feelings of shame for sulking and sadness because I lost. These feelings had a lasting effect on me, as to this day I don’t care for sports and couldn’t care less if I win or lose. Someone always loses at sports and I know the feeling. I just didn’t want those feelings; same thing applies to game shows.

It was wartime while we were living here. Mom told me the story of Loggie’s delivering groceries to our house by mistake. My father took all the meat from the parcels and fried it. So many things were rationed then, and meat was unaffordable to us I guess. I should have asked her what happened to him for doing this. My father worked in the woods until he got a job as a telegrapher with CNR and moved to Montreal. I didn’t see a lot of my father after he started this job as he would only get home for a week or two each year.

My grandfather Duplessis was my first love, and I was his pet, probably because I was his first grandchild, a girl at that. (My father was an only child). When Papa was a young man, he lost three fingers and blinded an eye while scraping a bullet that exploded. In later years he had to have the eye removed. Love sure drives out fear, as I used to take his artificial eye out, wash it and put it back in. He could do this himself, but I must have wanted to do it.

My grandmother Duplessis loved her bingos. One time we were all quarantined for scarlet fever. This was quite common at the time. It wouldn’t matter what the reason, my grandmother wasn’t going to miss her bingos, she kept going all through the quarantine, and we would have a quarantine sign hanging on our house. I don’t know what the consequences were for breaking this rule, but it didn’t matter to her. This was strange as she was a really strict Irish woman of no nonsense. “Never a lender or a borrower be” was her motto. I think bingo must have been an obsession.

I have early memories also of visiting my Savoy grandparents. They lived by the track where the ferryboat used to dock. I imagine I visited there often. I vaguely remember an occasion when very young. I was going skating on the river. Others must have been skating at the time. I had to cross over the railroad tracks to get to the ice. As I stepped over my skate got caught in the rails. They must have been watching me from the window as I left the house. I remember my Aunt Marie running out to get me as the train was coming. She unlaced my skate to get me out. So if it weren’t for Aunt Marie you probably wouldn’t be here today.

Another incident that shows you children were meant to be born, my grandmother Duplessis told me this story. When my father was a baby he was really sick with a high fever and close to dying. The doctor told my grandmother not to feed him solids. I guess the thinking was “Starve the fever, feed the flu!” Well, my father kept getting weaker. My grandmother’s father came to visit, and seeing my father told Grandmother to feed him, “He may as well die on a full stomach as an empty one.” From then on he started to get better, so thanks to your great great grandfather we are here today.

Another memory comes to me. I was crawling unafraid on the roof of the shed. Mom came out and started screaming. I remember thinking Mom was awful big as some men came running to get me down. She later told me she was pregnant. To this day I’m afraid of heights, another lasting effect.

It was while I lived here that I was invited to Romeo St. Pierre’s sister’s birthday, probably her sixth or seventh. They had peanut butter sandwiches. When I look back I think it was the first time I had peanut butter.

Another saucy memory was sitting on the front step. I had heard a bad word, and my babysitter told me not to say it again. It was the worse thing she could have said, as I started yelling it out over and over. Poor sitter, I can’t remember the word.

I liked to go to my grandmother’s side of the house. She always had a nice little table set up for me that had colouring books, crayons, cut-outs, etc. My grandmother was a great knitter and sewer. I had a big doll and she made a red snowsuit and hat for it. She made me lovely dresses, one in particular that I remember to this day. It was a salmon pink colour.

There was an old shed in the yard and when I got older we used to have concerts in there. I can remember one act we had was called “The Three Little Kittens.” We charged a cent to get in. I mention this in the poem I did for the Farrah Corner Reunion. The Deredin and Trevors girls would be a part of this. My Aunt Marie told me about the concerts they had at Farrah’s shed. Seems she was in a play where she was going to be killed and I got up from my seat and ran to her crying. I bet the other children had a great laugh at me.

From here my grandparents moved to the old Dr. Benson house where the fire hall is now. My mother moved to Morrison Cove along with all us children. At one time there were 19 of us living in that house. Our family of seven was in one room. Strange thing is I can’t remember a Christmas there.