I Am Now a Pencil
By Joseph Vermette

I am now a pencil . . . but I began life a full two centuries ago as a tree. Oh, the things I saw, the revolutions I witnessed! You would probably be loath, as a human, to exist as a towering 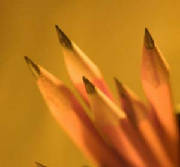 inanimate object, but I can tell you it was magnificent. Unfortunately, this all came to an abrupt halt when an insidious manufacturer came barging onto the set.

They arrived on a wondrous fall morning in a dump truck, still caked with dirt. There were no premonitions, no warnings, nothing indicative of the hardships to come. Only the heavy machinery that suddenly materialized a whole mile away, across a bald dirt field. Immediately, they hauled out sharp, whirring weapons with the intent of short-circuiting my epochal progress; they sliced my trunk straight through, separating me from my precious roots. I attempted to fight back, perhaps topple on top of them, but they were too prepared. I ended up in the back of their dump truck with a number of others.

The next thing I recall is awakening in the bowels of a sombre manufactory, if only to discover that I had been greatly violated. That is, I had been chopped into a pencil—a number of them actually, but my awareness was contained in just one. How unthinkably cruel! To be reduced from an old sprawling tree into a simple tool, a slave. I was soon packaged, dismembered, and shipped to faraway shores.

I found myself pawn to a school-aged boy, handed over to him by his mother. I had been “sharpened” and branded—that is, had his designation engraved in my person. The following weeks saw me carried, neglectfully, from home to school, school to home and inevitably “sharpened.” Each time I was sharpened, I shrunk about three, perhaps four, centimetres in size. It was unfathomably painful. So cruel. But I had endured, if only to spite them.

Then came the worst day of my centuries long existence. I had been taken to school by the boy and was in the process of “helping” him write a test. Strangely, the teacher spotted me—a mere three centimetres in size, I’d add—and instructed him to apprehend a new pencil. He did, and I ended up in the garbage.

Thus, for the past three months, I have been rotting amidst reeking piles of garbage in the local dump. I fear my time is approaching. But alas, it is for the better. I am far too old for this.

Joseph Vermette is a young writer living in Saint John, New Brunswick. He’s been writing poetry and stories from a very early age realizing by the age of 11 that he wanted to be a novelist. To read more of Joseph’s work or to purchase books he’s authored visit his website.