Close to Home
by Valerie Poulin

I imagined the headline in my travel diary. The entry would read: On Wednesday, October 11, 2006, a plane flew into an apartment building in Manhattan, New York. 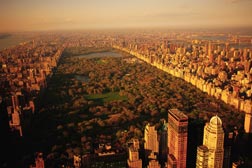 In town on a break from a particularly gruelling writing contract and looking to connect later that night with a small group of poets, on that autumn day I was sightseeing. I walked north on Broadway Avenue from my hotel, through Central Park, and over to the Whitney Museum on the east side of Manhattan, then across the park to the West Side.

Columbus Circle, a roundabout overlooked by Time Warner building, is located almost 30 blocks from my hotel, on the edge of Central Park west. Here, assorted attractions include souvenir vendors and tourists, cycle pedicabs, and city dwellers on break. There are individuals in prayer, couples in embrace, and street merchants in luck. A gigantic LCD screen across from a statue of Christopher Columbus flashes an ad for CNN studio tours.

What the heck, I thought. For the past two nights, I’d fallen asleep to CNN’s Anderson Cooper and woken up to the O’Brien “twins” as the anchor affectionately calls Soledad and Miles. The familiarity made me feel more at home and I needed to block the noise that went on seemingly all night on the street below my sixth floor hotel room. Besides, I wasn’t interested in waiting in line for Letterman; I didn’t have tickets to see Regis and Kelly. And there was no way I intended to rise at dawn for a glimpse of Meredith Vieira and the folks at Today. This was to be my one, goofy-tourist treat.

In salute to the brilliance of an IKEA floor plan, “Inside CNN” tickets are purchased deep inside the CNN gift shop where tourists are free to wander among TBS coffee mugs, Sex and the City photo books, and an assortment of Turner clothing, including logo’d pink military caps and tiny tees.

The large TV monitor caught my attention immediately. Everyone in the store was watching images of flames shooting out of an apartment building. There were not many details, a store clerk told me, but it had been reported that a small aircraft had just flown into a building on the Upper East Side. Holy crow, I think I said, I need to call home. 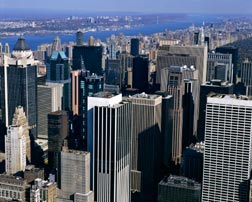 Just days earlier, my 10-year-old son asked me if NYC was “where those buildings were bombed.” Geez, the things kids say in the playground. I could hear myself correcting him. “That’s not true,” I said in a voice that sounded much like mine, only tighter. “Commercial airplanes were purposefully flown into the buildings by hijackers.” It was not the assurance my son expected, I am certain. And not what I wanted to give. Although he’d enjoyed many camping trips with his father while I stayed home, I had never been on a trip, or flown to any destination without him. And I am an admittedly nervous flyer.

On 9/11, I was working in a downtown Toronto office tower and watched television along with most of my coworkers as the second airplane flew into the World Trade Center. And like several of them, I left work before noon. At home, I watched CNN impatiently waiting for my son’s school day to end.

Five years later, in New York City, just days after our conversation, I am reminded of 9/11 and of my son’s concern for my welfare. I didn’t want my son to hear about the plane crash, but he was still in school. I stood there and fiddled in my mind with numbers. The tour would run about the exact length of time it took my son to get home from school and grab a quick bite to eat before heading to hockey practice. We had 45 minutes and a narrow margin for delays. I did not want my son to hear the news from a team mate, another parent, or the coach before I could reassure him of my safety. If I waited for his school day to end, I would almost certainly have to do the tour solo. There were only three of us waiting for this session to start. So, I lined up at the x-ray machine with the other visitors—a young gal from Brooklyn and her male pal from Staten Island, and followed them through a metal detector leaving behind concerns about the scene playing out across town. This was as good a place as any, I figured, for accurate updates to this breaking news.

As the tour guide led us through maze of hallways, stairwells, and corridors, my mind turned from breaking news to broadcasting. We learned about the newsroom pecking order, viewed the control room and studio sets. We saw a Katyusha rocket casing, a chromakey (blue screen) in action, and an old-fashioned TelePrompTer, and its modern version, up close. We even caught a quick look of Larry King’s shirt and trademark suspenders tucked neatly in a display case. Our small group, followed by a security guard, was kept busy with talk of satellite coverage, share points, and ratings. New is a business, after all.

Peeking through the observation window into the shared Zhan-Cooper newsroom, the young Brooklynite asked: Is Anderson Cooper in? Finally, someone asked the one question I hadn’t, but was dying to know the answer to.

I’m still not certain if the CNN employee was ironically misinformed, or was attempting to protect the reporter—being on television regularly must bring some fairly creepy interest by some very creepy individuals—because, in fact, we’d just missed him. Cooper was at the crash scene. At least, that was, according to his CNN web log posting (dated October 11, 2006 at 7:12 p.m. ET), which read in part, “We saw the smoke from our offices, and I jumped in a cab as soon as I could . . . It’s raining hard right now and that’s driven away most of the curious onlookers.”

Did the guide really believe us to be stalking types? Did she believe that we would cut-out and race to the scene of a fatal crash to see Anderson Cooper? Well, maybe. But it was raining and anyone visiting the Big Apple understands the improbability of getting a taxicab on a rainy day in NYC.

So, no Anderson Cooper; no Paula Zahn, either. And the only sign of celebrity was Larry King’s clothing boxed under Plexiglas. We settled for spying on the newsroom staff and catching a glimpse of Larry’s studio set replete with the gigantic Lite-Brite backdrop. Plus, we would receive a discount off our CNN souvenir mugs, magnets, and T-shirts from the gift shop. A closing video in the theatre and it was over.

It was close to 4pm when the tour guide steered us toward the exit where I grabbed by bag of discounted goodies and raced to a payphone.

As I relayed the sad news about the accident that killed baseball pitcher Cory Lidle and his flight instructor, I was thankful to speak to my son to assure him that I was safe before he heard the news on the radio, or saw it on TV. What I didn’t tell him was that I’d been just blocks from the accident site shortly before it happened and I was a little flipped out about that.

Later that evening, watching news coverage in my hotel room, I called home again. As I hung up the phone, it occurred to me that no matter where tragedy strikes, it always hits close to home.

Between corporate and technical writing gigs, Valerie Poulin writes magazine features, news, profiles, and general-interest articles. She is a published book author and an internationally published poet. Valerie possesses particular esteem for friends  transplanted from the east coast because of their warmth, their sense of family and home, and their admirable optimism.
Logging In...