How many of you are into walking? I have just started this little trend a few months ago. I don’t know if it was Spring Fever or what, but I felt compelled to get out there and give it a go. Now, I’ve never been 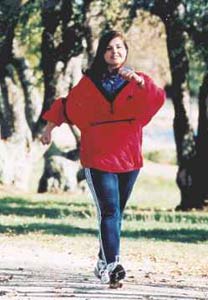 one to exercise very much, and I used to get a little annoyed at those who did.

You know, you’re driving along in the comfort of your air-conditioned car, enjoying the afternoon, all of a sudden you see this tiny little thing, dressed in sportswear and wearing a Walkman, running along the side of the road. Now why did she have to be out there making us feel guilty? Doesn’t she have anything else to do?

Well, I don’t know how it happened, but I finally got the desire to eat healthy and to exercise. I started by joining a weight loss program. Honestly, I would rather eat less than exercise. The program was going okay, so I took the next step. You guessed it—exercise!

I made up my mind to try to walk a couple of days a week. The first time I went out I nearly died. First of all, I live on a hill. By the time I got to the top of the hill I was breathing so heavy I’m sure the neighbours could hear me from inside their houses. Really! Enough of that; I headed back home. Luckily the walk down the hill was much easier. I even picked up a little speed. By the time I was back in the house I was quite proud of myself. Lying on the couch because my legs were too wobbly to stand, I marvelled at the fact that I had just completed my own marathon.

A few days later I was feeling motivated and decided to try it again. This time I made it a little further. I was still breathing like a steam engine, but I did it! 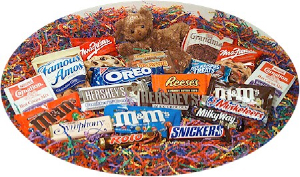 After suffering it out like this for about a week, I could make it to the top of the hill and beyond. I realized walking was much easier once the ground levelled off. I started taking the hill slowly and picking up the pace a bit at the top. My walk was becoming bearable. I couldn’t believe it!

Before I knew it I was walking every day, and feeling like I’d missed out on the days I couldn’t walk. I even walk in bad weather. I think I’m addicted. Who knew it could happen to me? I wonder if there is Walkers Anonymous. Seriously though, I feel great.

I do wonder when people drive by if they feel like veering toward me. I never actually steered toward anyone who was out walking; it just flickered in my mind for a second . . . Oh, you know I’m kidding.

One more thing I’ll share with you about walking is that it’s a great way to burn off those treats on which we’ve over indulged. It works for me when I’ve just come through what my family refers to as my “Chocolate Episode.” That’s the period of time when I’m frantically searching the house for chocolate. My children have learned to hide theirs from me. I am usually all right as long as I don’t find any. If I do find some, I’m out doing my version of a power-walk again. So if you see someone power-walking just think, she may not be a fitness fanatic, just a chocolate fanatic, and then it’s much easier to like her. Remember, life happens to all of us.

Wendy Astle graduated from Saint Thomas University with a Bachelor of Arts degree. Interested in writing her entire life, she decided to share her views on life after attending some workshops. Wendy lives in Blackville, NB, with her husband and two daughters. She can be reached at kato2@nbnet.nb.ca
Logging In...