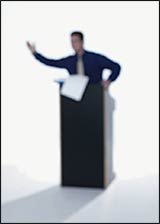 opportunity to hear my own voice in front of a thousand hormonally-charged teens was a temptation I couldn’t resist.

When I finally qualified for our school’s presidential election I ran for that too. It was my junior year and I was fully coming into my own pubescent awkwardness. At 6’ and 116 pounds I should have been doing everything in my power to stay behind the scenes, instead I was doing just the opposite. My platform was to restore school pride and secure more funding for our sports teams. It had all the pizzazz of a senior’s bingo night. I knew it and the student body would soon know it too. In order to give myself a fighting chance I felt my speech needed some impressive theatrics. Fireworks were out of the question, strippers risked alienating female voters and Burt Reynolds was tied up with Evening Shade. Luckily I had an idea that would be nearly as good.

The day I was to take the podium I gathered 40 of my closest friends. The plan, I informed them, was to finish my speech by stopping mid-sentence and asking if anyone smelled teen spirit. The line was a reference to a Nirvana chart-topper and would serve as a cue for my campaign manager to blast the song on his boom box. That in turn would prompt my remaining 39 friends to rush to the front of the auditorium where they would form a mosh pit and catch me when I leapt from the eight-foot high stage.

It was the perfect plan. Or it would have been, if the music had worked. I finished my speech that day by stopping mid-sentence, sniffing the air and delivering my line. I waited for the music to kick in at full volume. It never did. Unbeknownst to me, my campaign manager was standing outside smoking a cigarette and playing cards with our shop teacher.

I tried again, speaking even more deliberately. “Is it just me, or does something smell like teen spirit here? I mean seriously. Teen spirit? Huh? Anyone?” Three of my friends headed towards the stage, anticipating the cue. The others stayed firmly in their seats anticipating a tragic display of public humiliation. I learned that day that no one truly has 40 friends. Five or six: yes. But the commitment of friends 25-40 is somewhat less rabid than you’d hope to imagine.

The crowd had no clue what was going on, but the alarm in my cracking voice combined with my incoherent blathering gave them a sense that all was not well.

I waited for another drawn-out moment, but when it became apparent the music wasn’t going to be played I decided to lay it all on the line. Stepping away from the podium I sprinted to the edge of the

stage and aimed for the outstretched hands of my three friends. Unfortunately I leapt too far. Way too far, as it turned out. I cleared them by a good four feet and landed headfirst in the lap of our very startled French teacher in the front row. On a day of hard-earned lessons I learned to never again stage dive into an empty crowd and he learned to think twice about sleeping through another assembly.

Not surprisingly I lost the election, and with it my remaining self respect. Looking back on it, if it wasn’t for that concession speech I think I would have been totally crushed. God knows, our French teacher certainly was.

An award-winning writer and comedian, Ryan Murphy has written for HBO, A&E, The History Channel, Walt Disney Studios, Maxim and many others. The transplanted Haligonian presently lives in Vancouver, British Columbia, where he tries his best to limit his daily intake of Starbucks and fleece. Feel free to read more of his moonshine-inspired ramblings at: http://www.askmen.com/fashion/austin/index.html