Hurricane Katrina was being tracked by the National Weather service for weeks before it hit south Louisiana. I think it’s safe to say everyone in this area had an eye on the television to see what path Katrina would take. Everyone watched as the Category 1 hurricane walked over the tip of Florida on her way to the Gulf of Mexico. Soon she built up to a category 3. We all watched as meteorologists estimated the path she would destroy. Residents felt relief when it was predicted Katrina would hit the panhandle of Florida, an area already flattened by a previous hurricane. However, this hurricane was not taking the northerly turn originally suggested by the Weather Centre. Forecasters now said Katrina was headed right to Southeast Louisiana.

The quick news of the hurricane’s continuing on its west-Northwest pattern cut preparation short. People started to evacuate. They remembered the horrible experience of other massive hurricanes that had devastated the area more than 30 years ago. Soon people were comparing Katrina to storms such as Camile and Betsy as she lifted to a Category 4. With winds nearing 155 mph, authorities started to issue evacuation orders for low-lying areas. Many refused to leave even if evacuation was upgraded to mandatory. Talk of New Orleans flooding was common on the street as Katrina grew to a Category 5 hurricane with winds expected to reach over 175 mph.

I had to work the Sunday before Katrina was going to hit land. I had to help with hurricane preparations at my office. I was able to help with this because I had decided to stay home with my family and not evacuate. Many in our area decided to stay home because the hurricane was going to pass on the east of us. The question was how close would she pass. The size of Katrina was already larger than any state in America and many countries on our globe.  We knew the destruction would be phenomenal and felt hundreds of miles from the centre of the storm.

When I got home Sunday afternoon, I tried to finish the preparations that my wife could not complete. I wanted to pick up any loose items outside. I had to make sure patio furniture was put away, along 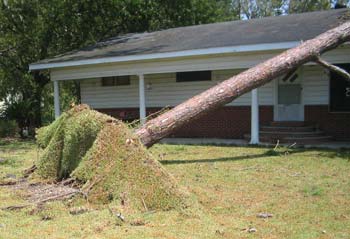 with potted plants and anything else that could become airborne when the high winds approached. Items not properly secured could become projectiles causing major damage and injury. Preparations also included making sure we had bottled water, batteries for flashlights and radios, canned food and other non-perishable items. We needed to ensure we had enough for about three days. Residents are usually ready for loss of utilities for several days afterward, depending on the damage caused by a hurricane.

The wind started to increase as night fell upon us. We prepared bedding in the hallway; this is usually the strongest part of our house. I stayed awake in the family den watching the news. About 1:30 am Monday it was reported that the hurricane was approaching. I kept a close eye on the television and kept the rest of the family informed. We could clearly hear the wind whistling outside. My wife, four-year-old daughter, two-month-old son and my mother-in-law rested in the hallway of my house. Our electricity blinked several times so I knew it would go out soon and remain off until hours or days after the hurricane passed. We were lucky, the power stayed on until about 4:00 am. We were able to keep informed by listening to local radio stations until they also lost power. Some continued to operate on emergency power generators while others could not produce any signal at all. With so much silence in the house, the squeaking, rattling and whistling outside were like the sounds heard in a horror movie.

My four-year-old daughter was very brave during this storm. She cried for two hours begging us to show her Katrina’s face. How do you explain to a little one that Katrina has no face? She contested that Katrina has an eye but why no face. The media has given hurricanes life. They speak of the eye and the way she will build strength. All the talk my daughter had heard about Katrina on TV resembled what she would describe as a monster. We finally calmed her down by telling her Katrina was mad right now. Later, when things settled, she asked if Katrina was still angry. Once she saw the destruction she was not interested in seeing Katrina’s face any longer.

As daylight approached our city, the wind remained at hurricane strength. This was when Katrina was at its strongest point over New Orleans. We heard on the radio how New Orleans had already started to take on water. I walked around the house while my family stayed in the hallway. I wanted to make sure our home was still intact and we had not lost any part of the roof. Even though I live in a brick home that is built very strong, I was still concerned about the 175-mph wind outside. I peeked out the windows. I saw branches, roof shingles and other items literally flying down the road. I have not counted the houses in my neighbourhood but I would imagine there are over 100 homes here. Most of them are over 2000 square feet and located pretty close together. This meant the wind was not able to really touch us full-force before being broken up somewhat by the structures.

By about 10:00 am, the wind had subsided enough that I was able to take a walk outside. Neighbours started to come out and evaluate the damage. We got together and began cleaning up the street. Without warning, the final band of weather came upon us. Many of us had to fight our way back into our homes. Even for an adult, hurricane force winds are nothing to play around with. The rain stung my face like bees and the wind pushed me around like an amusement park ride. The fear I felt was enough to make one reflect on his life. God was in everyone’s heart during this time. I imagine even a non-believer would have felt God’s presence. The city of Houma and the parish of Terrebonne surely had prayers answered. We survived Katrina with minimal damage to property and neighbours. 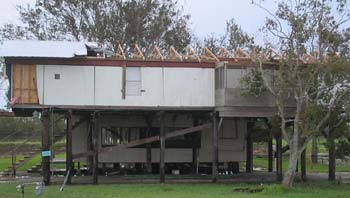 Even visitors passing through our area can see evidence of a hurricane. Roofs peeled back like aluminium cans, roofs ripped completely off the structure, trees fallen to the ground, and branches tossed about are common sights as you pass the streets in our area. We are very thankful. Next time a hurricane of this magnitude threatens south Louisiana I will evacuate. I can make that promise.

New Orleans and areas to the east were not so lucky. Stories of flooded New Orleans soon circulated the media outlets. Horror stories soon started to circulate too. I could not believe what was happening to New Orleans. Reports of over 10 feet of water became common news. Everyone was in disbelief.

I was able to witness much destruction firsthand as I had the task of going to my parents’ house some 20 miles away, to my east, to check on their home and property. On my drive I saw trees toppled, roofs completely blown off and any other kind of wind damage you can imagine. I saw trees uprooted and the grass from the surrounding area pulled up. It looked like someone had put a blanket of green carpet over the roots. It amazed me how perfectly the grass had been taken along with the roots.

The mayor of New Orleans and the Governor of Louisiana were busy trying to take control over a situation that was uncontrollable. Different people will give you different accounts of how they felt the situation was handled. Can you imagine the largest city in Louisiana is totally destroyed? Everyone in the city has to find a new home.

Today as I write this, eight days later, New Orleans is still floating in eight feet of water in some areas. Some people are still trapped in their homes and apartments. Many people will not even see what is left of their homes for months to come. Hurricane Katrina has damaged over 90,000 square miles.

It is hard to express the gratitude an American feels when people show the generosity many have shown. To see neighbours giving the little they have to the ones that have nothing. It amazes me. I cannot even begin to think of the monetary value to replace all that was lost. It makes us all realise the things we have come to take for granted.

I personally would like to thank everyone who has shown concern and generosity to the victims of Hurricane Katrina. My eyes fill up with tears as I see people, complete strangers, help each other, and embrace each other to show support. May God bless each and every one of you.