Grand Falls, Unassuming
Girl of the World, Girl of the Falls
by Alexandra Chasse  Sunday, September 25, 2005 — The air conditioner is running full tilt in our small dining room; its gentle hum punctuated with the occasional ping of accumulated water within the machine’s casing.

Turning it off, even four days after fall has officially begun, is out of the question — Washington, DC has been known to produce sticky days well into October.

My name is Sandy Chasse, pronounced “Shah-say” if you’re an American or any one of the dozens of friends or acquaintances I’ve accumulated around the world. I turned 30 a month and a half ago. I began my third decade in Washington, DC, where I live in an ageing but sturdy apartment complex with my husband, Kurt, and my nine-month-old son, Julien-Marc. Upon hearing it, most people defer to the English pronunciation of my son’s name, and some are even relieved when they learn I call him simply “JM.” A small group of people, far from here, can say his name exactly like I do, with the subtle, quick aspiration of the French “r” in “Marc.” These folks also know how to say my last name, and when I hear it pronounced this way I smile, remembering the farm and forest country from whence it came. I’m from Grand Falls, New Brunswick, otherwise known as Grand-Sault.

When I first moved to Washington, I was elated to discover the beauty and breadth of the Potomac River, which delineates the District’s southern border with Virginia. The Potomac (that’s Poh-TOH-mac, not Pot-o-MAC, as I used to think it was called) is a wide, verdantly flanked body, one of several commercially important rivers that are an integral part of the places I’ve called home. Among others, I’ve seen the brown Han that cuts through the heart of Seoul, Korea; the long and oft-plied Danube in Bratislava, Slovakia; the narrow, pleasure-boated Main of the Bavarian plains. I’ve always had a bit of a romantic infatuation with rivers — the way they come, but more importantly, the way they keep going, past either willows and other fluvial greenery, or past the urban geometry that’s evidence of human dependency on flowing water. Near any river, I always look downstream, to the very point where a bend in the course eventually obstructs any further view of the water. At this point of any river I’ve seen, I’ve always wondered, “Where does it go? Where would I go if I were on a boat?” This no doubt comes from growing up in a very small town with a large river flowing right through it.

Upon seeing the name of my hometown on exit signs along the Trans-Canada Highway, it takes out-of-province motorists all of three seconds to figure out what the frigid Saint John River encounters at Grand Falls. Encouragingly, many an Ontarian shuttling to Nova Scotia find the 15 minutes needed to leave the highway, park at the Malabeam Welcome Centre, snap a photo of the spring freshet thundering 23 metres down into the gorge, and pick up a Tim Horton’s coffee on their way back out to the highway (they’ll make it to Truro by late afternoon.)  Unlike other 15 minute stops along the New Brunswick portion of the Trans-Canada, Grand Falls easily evokes its pit stop status when I mention it to non-New Brunswickers: “Oh yah, nice falls, those.  Stopped on our way to Nova Scotia last year.”

So I’ll say it first: Grand Falls is that unassuming. It’s a shame, really, that spring freshets happen in April, the only month during which I am utterly pleased to not be in New Brunswick. Indeed, even to the Grand Falls townsfolk, themselves vexed by the ever-thickening mire of gravely snow-mush and the manure smell of thawing potato fields, the tourist value of millions of gallons of icy grey meltage precipitating over the Falls in one minute is but an afterthought.

But for some reason, it came to mind when I was walking along the breezy Potomac last week. In fact, a very surprising effect of having traipsed the world over is that Grand Falls, New Brunswick, unassuming, has come to mind often. At first, I couldn’t fathom why this happens. I spent many years counting the days until I could one day leave my small, unassuming town. (Mom and Dad, I wasn’t precocious when I knew at age 13 that I wanted to go to university — I just knew it was a natural progression from High School Graduation, and that necessarily meant leaving Grand Falls.) In fact, by my early teens I knew in great detail exactly what I wanted to leave behind: the Boulevard, the one shopping mall, a rather ratty hockey arena, my junior high (who doesn’t want to leave their junior high?), the potato fields that surrounded our house (oh, the sheer number of potatoes I consumed), and later on, those mind-numbing hours spent driving around wishing there was something, anything more to do on a Friday night than trying to sneak into one of the three local bars. (Mom and Dad, I did it only once, and it was to locate a friend inside. You should at least be impressed that I didn’t get carded.)

And then it dawned on me, right there next to the Potomac, why Grand Falls comes to mind often, and why I find myself weirdly impressed by news of my hometown’s recent growth spurt (just last year,

a third Tim Horton’s, a Best Western, and — wait for it — a Wal-Mart brought their franchises to little ol’ GF.) Yes, it was clear why Grand Falls comes to mind, even though it has none of the fine German wines and pastries I’ve sampled, the Euro-stone streets I’ve trod, the Korean temples I’ve seen, the Slovak hills I’ve climbed, or the cafés, watering holes and city night lights that decorated the Christmas tree of my twenties.

It’s that I truly believe because I left my unassuming hometown and tried to get as far from it as possible, I’ve earned the credentials to really, truly appreciate how frustratingly quiet, vast and inspiring it was while I was growing up. Nowhere else have I been able to sit on a rock, dangerously close to the torrent, feeling the spray moisten my cheeks, and then turn right around and want to hop in the car with an Ontarian motorist.  Nowhere else have I risen before dawn’s creeping baby-blue just to walk up the dirt road through a potato field and think about how far I could get in a canoe on the river just beyond the wooded vale. Nowhere else was the summer cacophony of virulent forest birds as strident, or the sound of a single noise travelling over snowed-over fields as sharp, because the Urbana just wasn’t there. Just hours after my last exam in high school, I stood on top of a remote train bridge with soon-to-be ex-classmates, clinging white-knuckled for dear life as the five o’clock freight train barrelled towards us. Behind our terrified, elated wooo-hoos, I thought, Bon Voyage, Sandy! Say goodbye, and say hello! It’s the biggest irony, isn’t it, that my fondest memories of Grand Falls were being built during the hours I plotted my departure.

My mother is convinced this is a snobby way of remembering a place that gave me a safe and fairly well grounded childhood. But how else could I objectively state that Grand Falls IS beautiful, that its people ARE largely congenial and hardworking, and that it IS generally a swell little town, unless I had left it for much bigger, more entertaining, and more complicated places?

In May earlier this year, a month before we settled in the capital of THE STATES, my little family took a vacation to New Brunswick. We actually shuttled through Grand Falls on our way to visit relatives 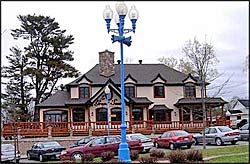 near Edmundston. I said to Kurt, as we drove down and up the Boulevard, “I grew up here, but  now I feel like this is another planet.” This was because I had finally become the person I’d fantasized about years before: a passing motorist, someone with better places to be than a sleepy riverside town. Yet, how privileged I felt, sitting in the Grand Saut Ristorante, waiting for Kurt’s assessment of the house’s famous pizza, as I had assured him it would be one of the best he’d ever tasted. I silently cheered when he nonchalantly offered, between mouthfuls, “You know, this really IS good pizza.” (He should know—he’s had pizza all over the world.) It was testament that I had come from good things, that I had grown up prepared, and that my little hometown had bona fide bragging rights other than a ton of rocks and water. I was a motorist AND an insider, and I had gotten exactly what I had come for: after supper, we stopped by the Falls, before heading out of town. The freshet was unusually large — it had been an unusually cold spring, and the snow had been slow to melt.

It was, in a word, spectacular.

Alexandra Chasse was born and grew up in Grand Falls, NB, before completing her undergrad studies in 1997 at Mount Allison University. Since then, she’s lived in South Korea, Slovakia, Germany, and “The South” (Alabama and Georgia). She now lives in Washington, DC, with her husband, Kurt, and toddler son, Julien-Marc. Between diapers and vacuuming, she teaches English as a second language and does some translating on the side. “I like autumn in New Brunswick, and scents that remind me of the places I’ve been.”
Logging In...