Christmas Eve had arrived and once again Mr. and Mrs. Santa Claus were making their special visits, saying a goodnight to the children of friends and neighbours. Frank and Dolores were our good friends, and we had shared many interesting experiences over the years.

Our neighbours and friends expected the Christmas Eve visits of Mr. and Mrs. Santa Claus. Frank with his blue eyes and gold framed glasses made a divine Santa. Dolores, my nursing colleague had made a 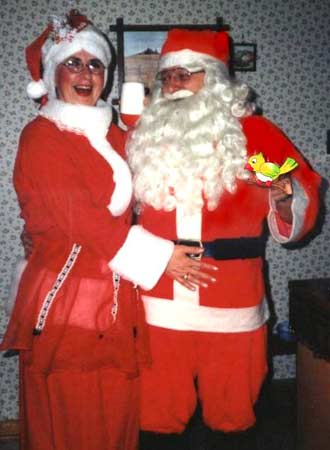 skirt suit for me, Mrs. Claus. I had the loveliest red wool hat, trimmed with white fur that blew in the wind and gathered sparkling snow crystals. With Christmas earrings, red ankle-high boots, black leotards, and rosy red cheeks, I was transformed into Mrs. Santa. It was always a marvellous experience!

Santa and Mrs. Claus liked children, theirs were all grown up. Dolores and my husband drove the sleigh for Santa’s visits, in all kinds of weather. We did this for years. Many times Dolores had to cover my operating room call, luckily we worked together in the same OR. While dressed as Santa’s wife, frolicking about in Frank’s big car, spreading cheer, and ringing Christmas bells, was no time to be called back to work. So my colleague willingly did it, and many times she was called back. But we carried on. It was a very gratifying experience for us, especially to one household. We always left this particular visit for the last. Santa really loved to visit a special young boy, and always arranged it so he could spend more time with him.

This last visit was to an exceptional family, a family that had more than its share of heartache but kept going, holding each other together tightly through the sad illness of their son, and brother, Joey.

Joey was a patient at our hospital. He had been diagnosed with a degenerative brain disease at the age of six. A disease that slowly and destructively stole his life. The picture on his bedside table was of a smiling blond haired tyke dressed in a tuxedo, being the ring bearer at a wedding the summer before I met him. Shortly after that wedding the first seizure came, and the life of the family and of Joey changed forever. That first seizure was the warning of what was to come, of what would be so shocking to his family.

All the investigations were done, the seizures increased, and his Mom took time off work and cared for him at home. He had an older brother and sister who cherished him. But no amount of love, hugs, or kisses could make Joey better. His health gradually declined, his parents were exhausted, and he was brought to the hospital. At the beginning of his hospitalisation his family would take him home often. But as his illness progressed the home visits became less, the pattern reversed, and his family visited the hospital. Many times in a crisis, they were there day and night. His father, an engineer, was always trying to find some way for Joey to receive his tube feeding more efficiently, and eventually he did.

His mom was a smart, bright, petite woman with tremendous spirit, energy, and faith. The years passed, Joey slid away from the real world surely and slowly, and became unresponsive most of the time.

Helping Joey’s nurse one evening, his dad sat and talked to us as we worked. I glanced at the discouraged father, and something caught my eye. I noticed he was making small nurse’s caps out of Styrofoam drinking cups, drawing black bands on them for the Registered Nurses and yellow bands for the LPNs. He was putting names of Joey’s nurses on the tiny caps and decorating the hospital room for his son. The room was much like a room at home after seven years in the hospital. The image of that father so engaged in that creative undertaking, sitting in a chair with an air of resignation and grief, is an image I have never forgotten.

By now, ten years after Joey’s diagnosis his Mom had returned to work, but came to visit every lunch hour, his father came in the evening. His sister was at university but she brought her big smile into his room whenever she came home. His brother visited, but not as often, he was too heartbroken. As the years passed this little boy slipped deeper into a coma.

The nurses loved Joey. The hospital staff, from the cook to the Administrator, would visit him to say hello. He had music playing most of the time, because his parents had found he was less agitated if he had music. Joey was a baby again. He received the tender loving care babies require, and he was a very sick little boy.

Joey’s parents were friends of Mr. and Mrs Santa. So Santa knew that every Christmas Eve, regardless of weather, or other commitments, Joey’s parents took him home. Feeding pumps, a suction machine, medications, everything making the corner in their lovely home a mini-hospital, complete with a magnificent Christmas tree. His family was sure he knew he was home, that he knew Christmas, and remembered Santa. Maybe he did. The family members worked out schedules for having someone with Joey at all times.

So Christmas Eve became a special time for a very stricken and ill boy and his family. Not only was Joey home, but Mr. and Mrs. Claus always visited. They did it every year, even after Joey’s sister married and was home for Christmas with her husband, the tradition carried on.

The car-sleigh would pull up the long driveway, and Mr. and Mrs. Santa Claus would bounce out of the car into the frosty air, and run toward the house that was so beautifully decked out for the season. We would go right in and right to Joey’s bedside. Santa would talk a little while, and then he would ring his bells. A miraculous thing would happen when those bells rang. JOEY WOULD SMILE! He knew the sound of the bells. He knew Santa’s voice, proving that a memory deep inside from long ago still remained. It made Christmas sheer joy, because that smile was miraculous!

The years passed, and Christmas seasons came and went, Joey deteriorated, but he still smiled at the Christmas bells. It was indeed amazing, and truly a gift to everyone who loved him.

At age nineteen Joey passed away. His parents were grief stricken now because he was gone forever. But time healed, and they slowly returned to their lives. His mother smiled again and was steadfast in keeping his memory alive. They weren’t bitter, but longed for things to have been different. They had no regrets.

Santa and Mrs. Claus had no regrets either. I remember the tiny nurse’s caps, the Christmas Santa bells ringing, a sick boy smiling, and a Mr. and Mrs. Santa standing beside his mother and father watching him smile, all with tears sneaking down their faces.

It was indeed Christmas when we saw that smile. Magic was in the air, Christmas music played softly, and eventually Joey’s sister stood next to her younger brother holding her own baby boy. Joey had a life of eighteen years, even though he was ill, he had a life. He also had a smile that enriched others lives, and made them appreciate the things we often overlook.

I believe Joey has Christmas bells whenever he wants them now, and he can enjoy his gifts again.

But the best gift of all he left for us—the memory of that CHRISTMAS SMILE!